From time to time, I think about the people who’ve touched me markedly, in passing moments.

1) There was the German cosmetologist.  It was the beginning of spring, and returning to Germany from holiday, I’d run out of makeup.  I’d stopped taking birth control in the fall, not wanting to deal with the hassle of obtaining ten months’ worth of prescriptions, and my skin was a disaster.  I was becoming reclusive again in the early springtime–springtime in Germany (ha) is intense, with all the Rilke-isms floating around and unwanted post-modern interpretations of Mozart operas coming to an opera house near you (h8 Mozart, minus The Magic Flute), and I’d made enough friends so that it felt safe to recede again a bit and deal with the wreckage of the fall/winter storm.  Part of that meant getting back on birth control, finding a new toner, and replenishing my oil-free, for-sensitive-skin foundation.  The foundation I normally used wasn’t available, so a woman at the department store helped me find something similar and applied it to my face.

You know how, when you go for a long period without touching anyone, the slightest touch can feel totally electric?  Brushing someone on the street, exchanging cash, etc.  And it was like that as the cosmetologist applied foundation gently to my skin, pointing out kindly that it wasn’t possible to cover everything up, making jokes with me, smoothing out the color around the edge of my face and neck. 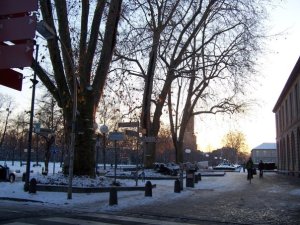 2) Then there was the woman I met in a Boston cab, soon after hearing that Kayla had died.  My dad’s reaction had been perhaps too concerned to be helpful–and I needed a strategy to get me to the airport in one piece.  Once there, I somehow felt a sense of freedom, and I ate a bag of potato chips; on the airplane, I was seated next to a very handsome man, which somehow made me laugh.  But this lady helped me to get there, in this vulnerable phase of my life, before I really had my own strategies established.  She very intentionally communicated that she was going to talk to me about “random things”–we talked about college applications, how absurd they were, my visit to Middlebury.  What mattered was the fact that she gave up her time to talk to me, about anything, rather than submitting to fear or discomfort over being trapped with a teenage girl wanting to weep in a Boston cab.

3) I also think about Mauro, who I e-mailed with about 80 times as I prepared the logistics of my six weeks of fieldwork in Uganda.  I received this e-mail from him, soon after my dad had passed away, in response to some very belated coffee and a framed picture of my favorite church (St. Alban’s) in Baton Rouge that I’d sent him, in a feeble attempt to say “thanks,” since really, he’d willingly given up so many pieces of his time helping me to plan my trip.  He wrote:

I received your beautiful and thoughtful present.

I like so much the English word present. It immediately reminds me of a presence, the presence of a friend that you may have not been thinking about for a while. Immediately he/she comes back to you as the most beautiful gift. Because the gratitude that you have demonstrated to me for my poor and little help is something not usual and for sure not due.

This was especially warming coming from such a pragmatic NGO worker.  But all of his messages to me were thoughtful, in response to my near-panic attacks over wondering where I was going to stay in this country, less than 100 miles from the South Sudanese border, what I was going to eat, and how the heck I was going to get there.

Anyway, there are more of these people, whose kindness I’ve felt, and I don’t think imagined (although I’m sure that sometimes you imagine it, because you need it), daring the fine fabric that separates people.  People can be so good.

On another note, I dreamt last night that I was struggling to make poached eggs.  They were really quite awful; I was poaching them with some spinach, I think, but they weren’t cooking at all.  I was living in an American family’s house, but they spoke German.  Then I somehow was the close companion of a woman who’d broken the law, and we were treacherously wandering about (a) town (somewhere).  We ran into “Cyrus’s dad,” (who?!?) who wanted to arrest her, and then suddenly we were driving along the side of a mountain, encountering near-death.  She tried to pay off a ticket under someone else’s name since she was on probation or something, and soon after, I woke up.

So, does anyone have any resources on dreams to point me towards???  Mine are so minutely detailed that I feel like God might be trying to tell me something.  (Kidding.  Mostly.)

This entry was posted in Uncategorized. Bookmark the permalink.

2 Responses to Daring the fine fabric