Baby, I love you more than life itself.

When my dad came to move me out of my apartment in Denver in May, we went out to eat at a pizza restaurant in an old house west of the university, towards the mountains.  We talked about a lot of things we had never talked about before or at least that we had not talked about for a long time—his mom, my childhood, this one time in Lafayette.  As we talked, we noticed a little boy playing at the table next to ours.  His name was something from the 19th century: Felix, George, Alexander…I remember now: it was definitely Alexander.   Alexander’s parents were weirdly distressed with their child’s playing, even though he was one of the mildest kids either of us had ever seen.  So after a while, blond, curly haired Alexander, tired of his parents, his parents tired of him, noticed my dad.  He crossed the room to my dad’s chair, and my dad commenced this game of completely covering Alexander’s head with his baseball cap.   Alexander laughed and laughed and eventually crawled into my dad’s lap while they played this hilarious head covering hat game.  It was weirdly beautiful to watch how easily my dad and Alexander hit it off.   Even Alexander’s parents were happy.  More importantly, Alexander was happy.

My dad loved all children, and he had a demeanor with a depth and brightness that was very easily understood by children.  And as I think of my dad, this is what I remember: when I was around four years old, there was this video I watched frequently about world cultures.  These kids traveled all over the world in under an hour, learning dances and music from different countries; and whenever the kids in the video made it to Japan, and the Japanese music started to play, he would rush to my room to grab this doll, dressed in a bright red kimono, that I think he must have bought in Japan sometime in the 1980s.  He would twirl ridiculously around the room with this doll on his head, widening his mouth and eyes in a way only my dad could ever do.  You know what face I mean if you’ve seen it.  It’s the same face he made if he was pretending to be spooked by something or if he was on the verge of mocking high drama.  I think it was the most hilarious thing I ever saw him do.

My dad gave profound meaning to the past.  It wasn’t so much that he dwelled in the past but that the past was always a very present current in his life, like a river that seeped through cracks in the rocks or like houses he visited to unlock and explore, room by room, over the years.  I remember in my childhood visiting his old homes throughout Louisiana, his old schools.  I am sure that I too will nurture these habits, for better or for worse, of visiting, year after year, the places which have held meaning for me.  His favorite book was Brideshead Revisited, which reflects on memory and the ways in which memories come alive even when the places haunted by them are changed and the people associated with them are gone.  One meaningful, memory-filled place stands out: there was this white gazebo that stood a little out on a marsh, by the lakes at LSU, that he found one day a few years ago when we were riding bikes out there.  As soon as he saw it, he stopped, realizing it was a gazebo he’d seen in his childhood, and everytime he saw it after that day, he would either take a picture of it to send to me or tell me in excitement that he had once again visited the gazebo.  He loved that gazebo.  He might have said, and probably in fact did say, “That gazebo is awesome.” 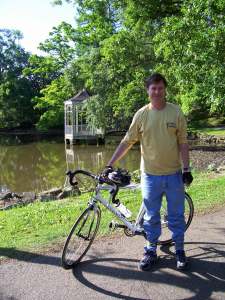 This entry was posted in Uncategorized. Bookmark the permalink.

5 Responses to Baby, I love you more than life itself.